Overview of projects in Somalia

Somalia is still recovering from more than two decades of armed conflict, during which most government structures and institutions were destroyed or severely damaged. The Netherlands’ support to Somalia focuses mainly on state building, in particular on the Rule of Law. In support of the Government of Somalia, the Netherlands development programme aims to enhance legitimate governance, to make people feel safer and more protected by government structures and to increase people’s equal access to justice. Women and vulnerable groups are seen as the most important target group. As humanitarian needs remain high due to conflict and climate hazards, the Netherlands continues to provide humanitarian aid to vulnerable communities. Other focus areas in Somalia include (maritime) security, countering and preventing violent extremism and, on a smaller scale, private sector development with the aim of contributing to youth employment and promoting durable solutions for people on the move in Somalia.

The Dutch programme for Somalia is based on the theory that the main cause of fragility and conflict in Somalia is a broken social contract between citizens and the state. The programme portfolio aims to restore and enhance this trust. Activities are designed and implemented through engagement with citizens as well as with government institutions at local, regional and state level.

Over the reporting period, the security situation worsened slightly in Somalia. Limited progress was made on recovering areas controlled by Al Shabaab and inter-state conflict worsened. On a more positive note, socio-economic conditions, international engagement and the humanitarian situation remained the same or showed slight improvement, with the exception of relations with the Gulf States, which continued to deteriorate. In 2018, Somalia’s overall stability rating, as scored by the FSI, was 113.2, ranking second-worst behind South Sudan out of 178 UN member states. Somalia’s rating increased by 0.2 compared to 2017. While this increase may seem negligible, it is worth noting that it represents nearly a third of the 0.7-point drop Somalia recorded over the course of the previous five years.

The Netherlands’ development support has contributed to the long-term stabilisation and rebuilding of Somalia. It has helped to prevent internal conflicts and has strengthened structures at various levels of governance. On a local level, individuals have benefited from increased social cohesion and security, an increase in equal economic opportunities, increased resilience, access to humanitarian relief in areas hit by humanitarian disasters and better and more legitimate governance.

The Somalia Stability Fund (SSF) is a multi-donor fund that supports the development of a peaceful, stable and secure Somalia. It is designed to support enhanced government legitimacy and reduced political and communal conflict through the fund’s projects on increasing government visibility and community engagement; enhancing popular participation in governance, particularly for women and marginalised groups; and addressing the structural drivers of conflict and instability at the political and communal level. 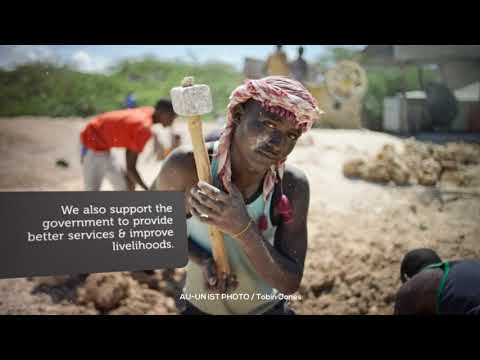 During the reporting period, the security situation worsened slightly in Somalia. Limited progress was made in recovering areas held by Al Shabaab and inter-state conflict worsened. The results below in the area of peace processes and political governance are mainly those of the Somalia Stability Fund. One of the fund’s key achievements during the reporting period was to make progress in the peace process between the Galmudug and Ahlu Sunna Wal Jama (ASWJ), which was partly achieved through facilitation activities. The peace deal enabled Galmudug State to extend its authority into ASWJ-held areas and assume control of the designated capital of Dhusamareb. Another achievement was to make significant strides in supporting popular participation in governance, particularly for women and marginalised groups.

The 2018 target for the number of people reached with stabilisation activities through the Somalia Stability Fund was surpassed. Progress in finalising construction of the Mogadishu Court and Prison Complex, which had already become operational during the previous period, was slower than expected.

Dialogue processes in the form of dialogue forums, meetings or conferences have prevented conflicts and led to increased social cohesion.

All 7 dialogue processes can be attributed to funding from the Netherlands. This number represents 12% of the total achievements of the Somalia Stability Fund

121 men and women have benefitted from socio-economic opportunities in partnership with government through 13 economic development and livelihoods investments across Somalia. These investments are delivered in close collaboration with local state administrations and offer an opportunity to strengthen government-community engagement.

The target value was exceeded by 34%. All beneficiaries can be attributed to funding from the Netherlands. This figure represents 12% of the total number of people reached through the Somalia Stability Fund. Progress, not on track

The Mogadishu Prison and Court Complex had already been made 98% operational during the previous reporting period, by implementing partner the UN Office on Drugs and Crime. During the current reporting period, the Somali authorities were able to start using the facility. Although the complex was operational, not all construction components had been completed. The complex still needed to be expanded with an additional 250-bed block, an administrative building, storage and a medical wing. Temporary solutions were found for the missing components while these are under construction.

In spite of the fact that Somalia represents a highly challenging programming environment, results generally met or exceeded targets. What we have learned from earlier experiences of programming in fragile contexts, and in Somalia in particular, is that it is important for development activities to be flexible in nature. It can be helpful not to predetermine exact geographical focus areas and activities. Instead, we try to work towards jointly agreed overall outcomes. In addition, no activity is implemented without prior thorough assessment of risks relating to security, political economy, violent extremism and gender dynamics. For future programming, climate risks will be a more specific focus of such analyses.

The Dutch development programme for the coming years will be guided by the Country Strategy for Somalia 2019-2022.

The number of policy areas will be expanded to include resilience of the Somali population to humanitarian disasters and a stronger emphasis on youth, employment and jobs; human rights; and gender equality. The Netherlands has identified climate change as a cause of a range of threats and other consequences, leading to societal changes. The programme will therefore take into account such predicted changes and will mainstream climate considerations throughout its activity portfolio.

The following reporting period will be marked by state-level elections and presidential elections, which may lead to further political instability as well as security challenges. It is also anticipated that the country will face severe humanitarian challenges, since there is a tendency for cycles of extreme drought to follow each other more swiftly. The country may also face other humanitarian challenges, such as the locust plague that affected the Horn of Africa region at the end of 2019/beginning of 2020. In anticipation of these challenges, the Netherlands development programme will continue its flexible, iterative and adaptive course.

Visit the government webpage on Somalia