84,326 people made use of the legal aid helpline that was set up with Dutch support

Water management plans are operational for an area with a population of 4.2 million people

Partnerships for the goals

Overview of projects in Rwanda

• Poverty has not been significantly reduced in recent years

• Limited access to justice and poor understanding of rights

• Limited freedom of speech and no space for political opposition

The Netherlands and Rwanda’s bilateral programme focuses on key interventions contributing to economic development, while at the same time contributing to:

• Transition from aid to trade

Since the decision was taken to phase out bilateral development co-operation with Rwanda, economic diplomacy for sustainable trade and investment is increasingly at the centre of Dutch engagement with Rwanda.

In 2018-2019, work began towards phasing out bilateral development co-operation, in line with the decision by the Minister for International Trade and Development Co-operation to transition the focus of the bilateral relationship with Rwanda from aid to trade. In that light, the co-operation programme has been adjusted to maximise sustainability after the phase out. Nonetheless, the bilateral programme in 2019 was sizeable.

Through a multi-sectoral programme, the Netherlands continued to support Rwanda in combating malnutrition, while at the same time expanding opportunities for smallholder farmers to increase their income from horticulture.

The integrated water resources management programme continued to build the capacity of the government of Rwanda to manage its water resources and prepare for a future in which demand for water will increase manifold.

In the Security and Rule of Law sector, significant achievements were made in terms of access to justice through a legal helpline. Many groups consisting of genocide survivors and perpetrators worked on reconciliation through community sociotherapy.

As bilateral development co-operation is being phased out, the level of responsibility for local actors (in particular the Government of Rwanda) to take ownership of the interventions is increasing. Since the capacity of the local actors is sometimes constrained, careful attention is being given to capacity strengthening and the accompaniment of the Netherlands Embassy’s counterparts.

The ‘Investing in Horticultural Development in Rwanda’ (HortInvest) project is a four year (2018-2021) horticultural value chain project that supports the mission of the Rwandan National Horticulture Policy in terms of fast economic growth and the rapid reduction of poverty and malnutrition in Rwanda. This project is implemented by SNV (lead partner), IDH, WUR, Agriterra and Holland Greentech.

Its main intervention areas are:

2. Enhancing the food and nutrition security of rural households involved in horticulture and urban consumers

By targeting 44,000 horticultural farmers, 30 SMEs, 300 co-operatives and farmer groups, and at least 5 export companies, the project aims to have a large impact on households as well as on the national economy.

The project made good progress in the reporting period and the results are shown below, under the theme of Food security. 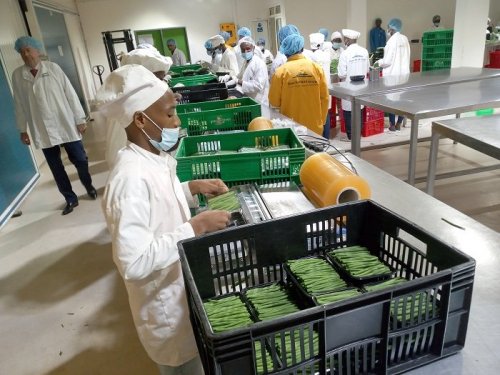 Details about this project on OpenAid

The Netherlands continued to strengthen the rule of law in Rwanda, so that citizens are better able to access their rights through fair, efficient, impartial, independent and accountable institutions. Through the creation of a legal-aid phone-line, for example, 84,326 people have received improved information about their rights. Furthermore, the Netherlands contributed to improve the quality of the justice system by training judges, prosecutors and defence lawyers, for example.

In promoting human rights through the Human Rights Fund, among others, the Netherlands focused on the priority areas of supporting human rights defenders and promoting freedom of expression. The capacity of human rights defenders and journalists has been improved through training on digital safety and research skills in documenting human rights violations. Beneficiaries have been equipped with skills to produce evidence-based reports while safeguarding their own safety and this capacity building has indeed led to a number of interesting human rights reports. Freedom of expression was promoted by supporting a progressive and inclusive radio show, on which a particular societal issue is tackled and debated each month. As a result, more public debate has taken place between journalists, civil society representatives, government officials and citizens on the human rights situation in Rwanda and its development.

In the water sector, the Netherlands has been supporting Rwanda in the introduction of integrated water resources management (IWRM) since 2015.

A technical assistance programme is working with the appropriate authorities on developing management plans for water resources, covering four catchment areas with a combined population of 4.2 million people. Some of the interventions identified in the plans are currently being implemented, such as erosion prevention measures.

In the middle of 2019, a second phase of support to IWRM began. In light of the decision to phase out bilateral development co-operation, the long-term sustainability of interventions has become significantly more important. This second phase therefore places the Government of Rwanda in the driving seat to a greater extent when it comes to rolling out IWRM in the country, as well as in strengthening a community-based approach to landscape restoration.

The horticulture value chain development project constructed 10 demonstration plots at co-operatives to train smallholders in growing vegetables, such as French beans, broccoli and green peppers. The value chain project also approved 14 business cases and innovation projects for co-financing. This will help with the commercialisation and professionalization of the horticulture sector for trading and marketing products on local, regional and export markets.

A number of Rwandan vegetable exporting companies started to export products to the Netherlands through supply contracts with a large Dutch importer. These companies are being coached by the project.

Following the decision in November 2018 to gradually and carefully phase out the bilateral development co-operation programme, an increased emphasis has been placed on strengthening economic ties by promoting sustainable bilateral trade and investment and Dutch private sector involvement. In 2019, there was increased interest from Dutch companies in partnering with Rwandan companies and jointly applying for Netherlands Enterprise Agency (RVO) instruments with 50% own investment. Investments have been made in several agricultural sectors and the maritime logistic sector. Projects were also initiated to improve three commercial value chains (maize, tea and potatoes).

In 2018, the decision was made to gradually phase out bilateral development co-operation with Rwanda. This process will be spread out over the period 2019-2022. During the phase-out period, political co-operation between the two countries will continue and efforts to strengthen economic and trade ties will be intensified.

The phase out means that sustainability and the local embedding of interventions will receive even more attention than usual.

At the same time, the Netherlands and Rwanda, together with other partners, will look at innovative approaches and alternative financing mechanisms, for instance through private sector instruments. The objective is to increase economic co-operation, which will benefit both countries.

Download PDF with results for Food security in Rwanda